This is what started it, a Wellhouse converted Mazda Bongo: 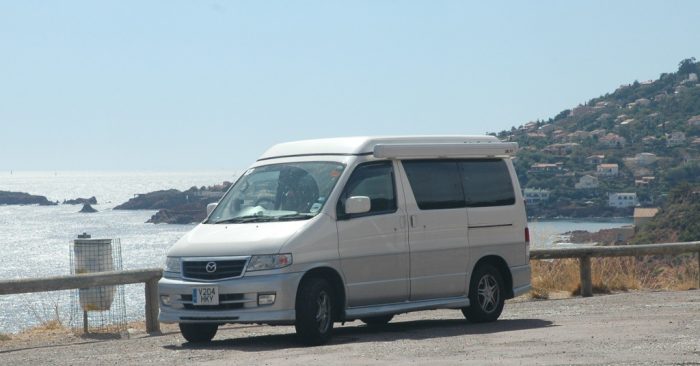 Our Bongo, somewhere between Frejus and Antibes

Side conversion with two-ring hob, fridge, Webasto heating and interior retrimmed in leather.   These were never sold new in the UK, but were shipped from Japan, meaning they were very high spec with electric windows and blinds and air-con. 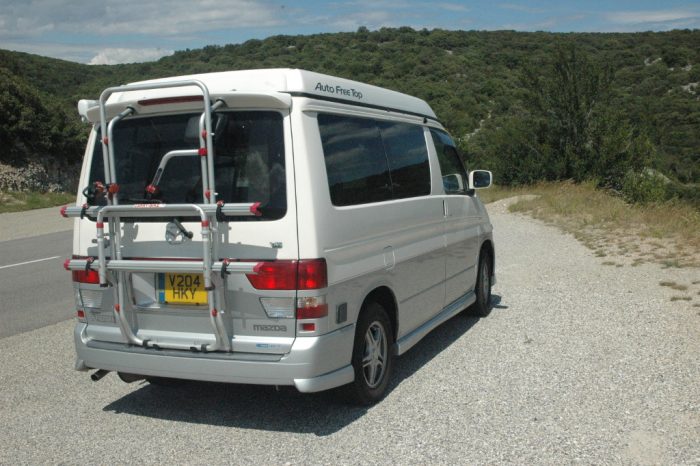 Ours was the 2.5 V6 petrol version, which went like stink and was a hoot to drive.  It didn’t go round corners so well, though, but getting tailgated on bendy French motorway entrances by boy racers and their wheezing diesel Pugs, then flooring it on the slip road and watching them disappear into the distance was a great game. 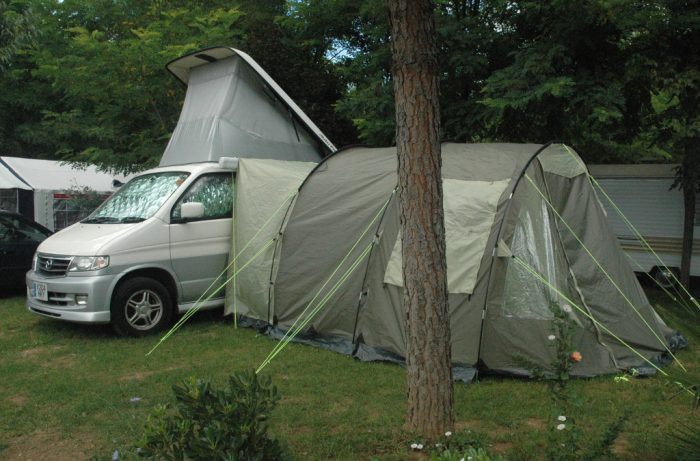 Next came a Dethlefs Globevan on a Ford Transit chassis: 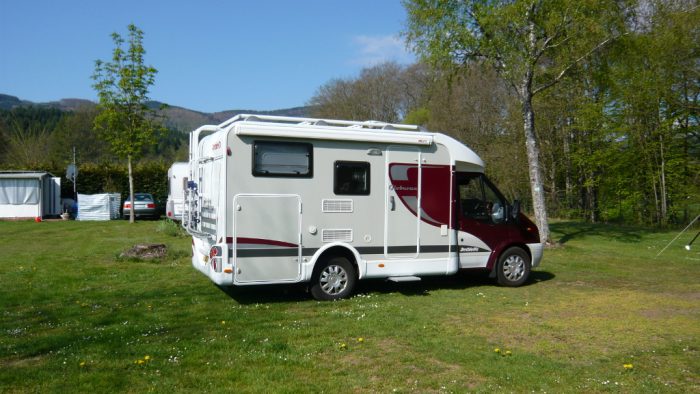 Great fun as as the Bongo was, we should have skipped it and gone straight to something like this.  We liked the fact it was a Ford, as the more usual Fiat chassis was getting stick for various reasons to do with gearboxes and reversing up hills.  It gave us everything that was lacking in the Bongo, especially a fixed bed and fixed table: 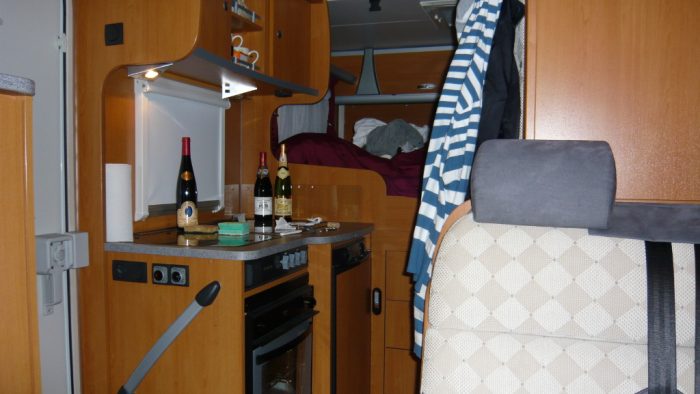 However, that bed gave me cramp and nightmares.  Also, cramming a fixed bed into a sub six metre motorhome meant there was not a lot of lounging room for two, so that was a bit troublesome.  The main reason for getting rid of this one was nothing to do with the motorhome part of it: 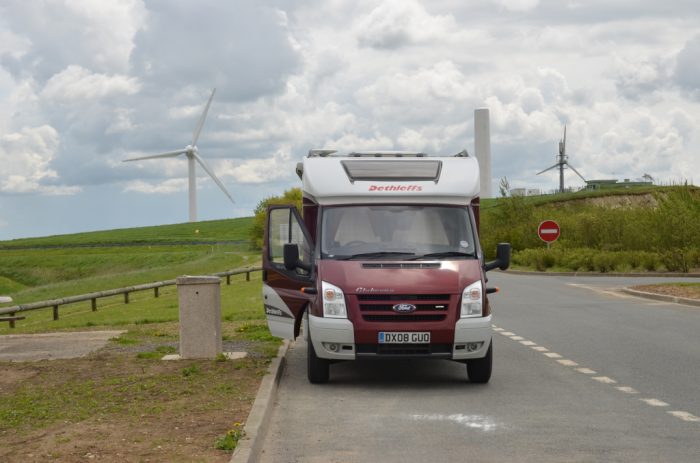 It’s a Ford and we thought that was good

There does not appear to be anything unusual in the above picture, but one day a Bailey Approach parked up next to it and it became obvious that ours was a very tall, very narrow vehicle.  Combine that with the cart spring rear suspension and it can get very scary in high winds.  Those wind turbines are there for a reason.  Another problem was that at anything above 50mph the doors would start to be sucked out resulting in a howling noise that could only be kept in check by winding the window down slightly.

We liked this motorhome on the whole, and got air suspension fitted to the rear to try to tighten up the handling, but that just turned it from being terrifying to merely unpleasant, so it had to go.

After much deliberation, we got: 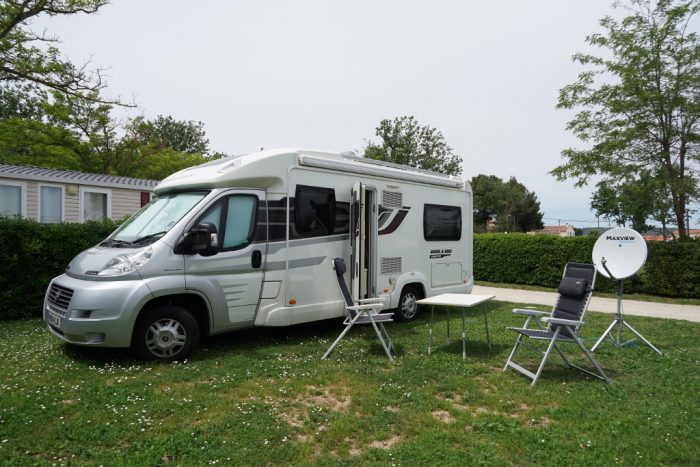 Space, comfortable bed, no more nightmares, reasonably fast for what it is, and entirely predictable in windy conditions.  Everything about the Ducato is better than the Ford.   We just need to remember the door is on the wrong side and avoid parking with the offside next to hedges. 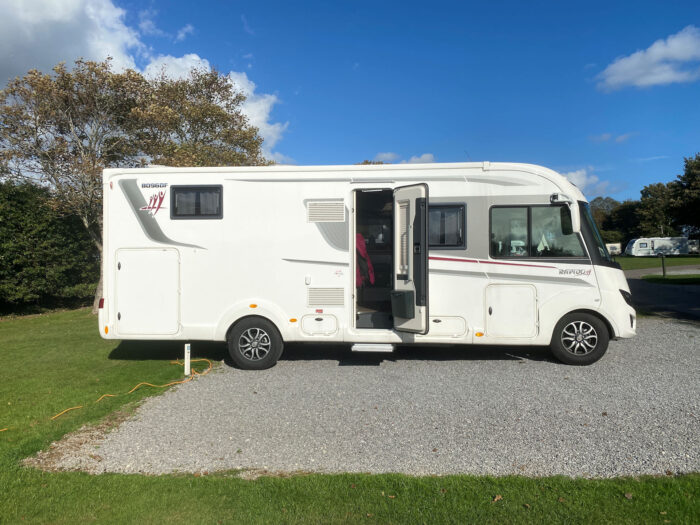 It seemed like a good idea at the time.  150bhp engine up from 130bhp (good), automatic gearbox (jury is out), cab same width as the rest of it (good), back to Truma warm air heating (come back initially hated Alde, all is forgiven), integrated satnav (preferred the old one so still using it), half a meter longer and rubbish reversing camera (bad), lots more storage (good), 3700kg, very bad, island bed (good), Bognor sunnier than Massane Plage (good, but not for long).