Our attempt to get home avoiding the horrible M20 and the nearly as horrible M25 has generally worked.  The only bad bit of road was between Folkestone and Brighton.  Once the A27 was involved everything was easy, and the road north from Chichester very motorhome-friendly.  Apart, that is, from Chieveley Services, where refueling was impossible due to the stupidly narrow gaps between the pumps.

Sat-Nav took us around Chipping Norton, which was better than going through it. Now we are in Moreton-in-Marsh again, where we find a chip van selling great fish and chips.

Having visited Chichester on Sunday we decided to go to Portsmouth on Monday, hopefully to see some stuff at the historic dockyard.  We got the train, which, amazingly, is cheaper than the bus (and faster).  The historic dockyard is a collection of museums and attractions, where you could easily spend a week going round.  The pricing structure is utterly confusing, with each attraction having a price.  However, a year-long ticket is available that lets you go to all the attractions for not a lot more money, which is far better value if you are here for a couple of days, or are planning to come back.  At least we think it is for a year, or maybe just until the end of the year you are in.  Who knows, it just adds to the confusion.

Anyway, we chose to get a single ticket to the submarine museum, which involved a waterbus trip across the harbour.  Landlubbers beware as getting on and off the boat is not for the clumsy or scared of water, although the conductor chap was helpful.

The museum was excellent.  Guided tours only, unfortunately, but a free-for-all in this boat would not have worked, as it was very cramped. 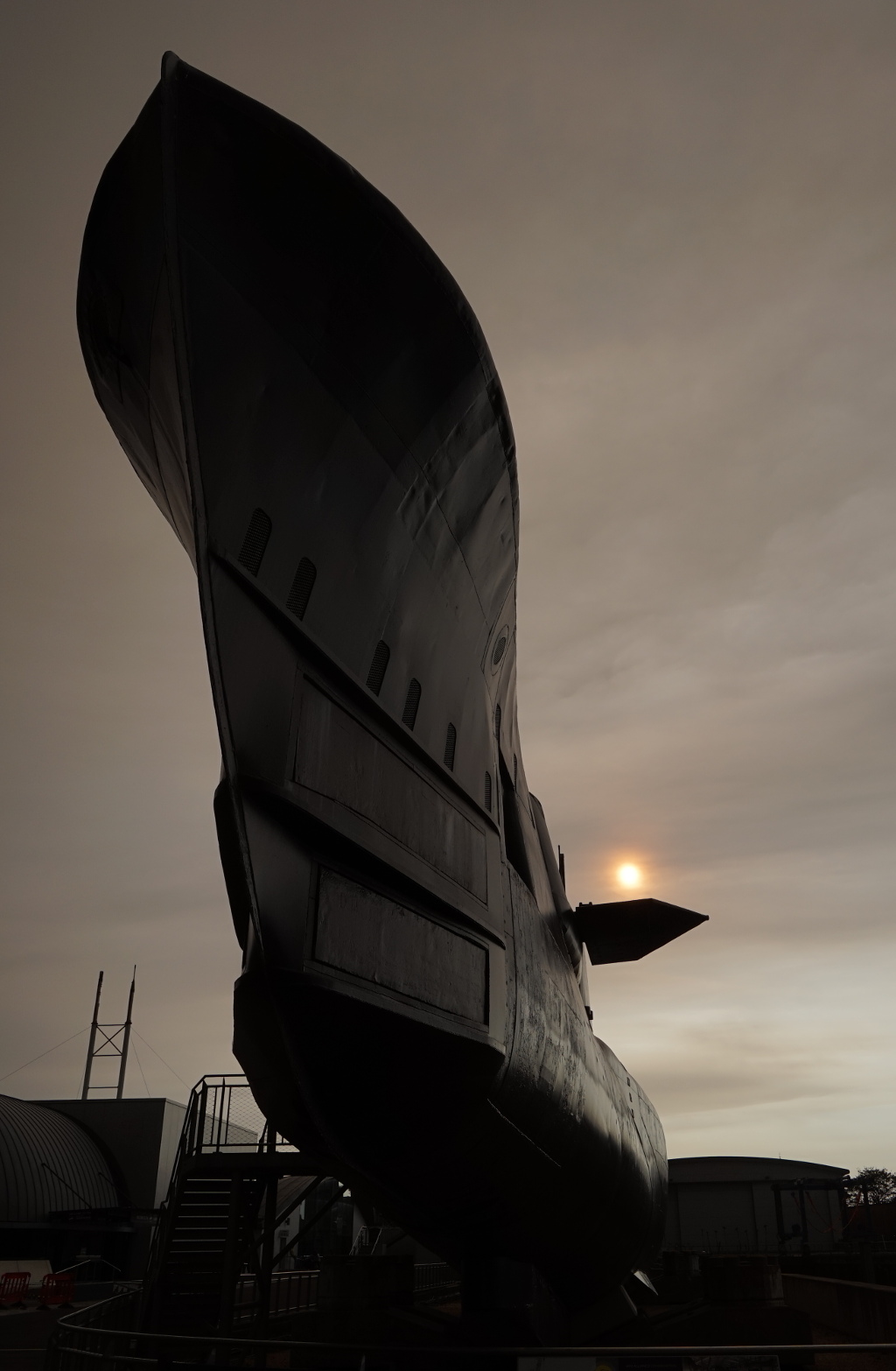 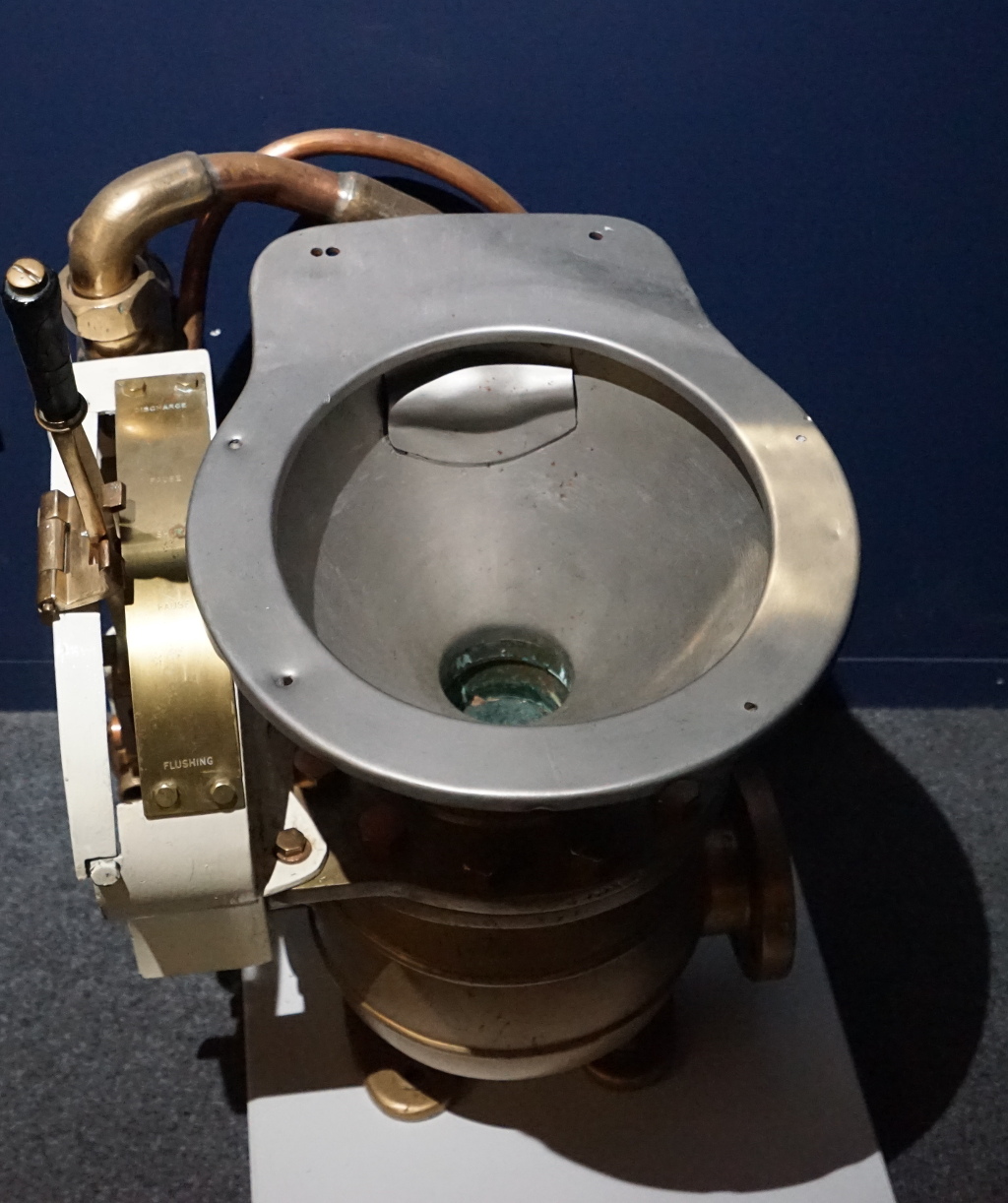 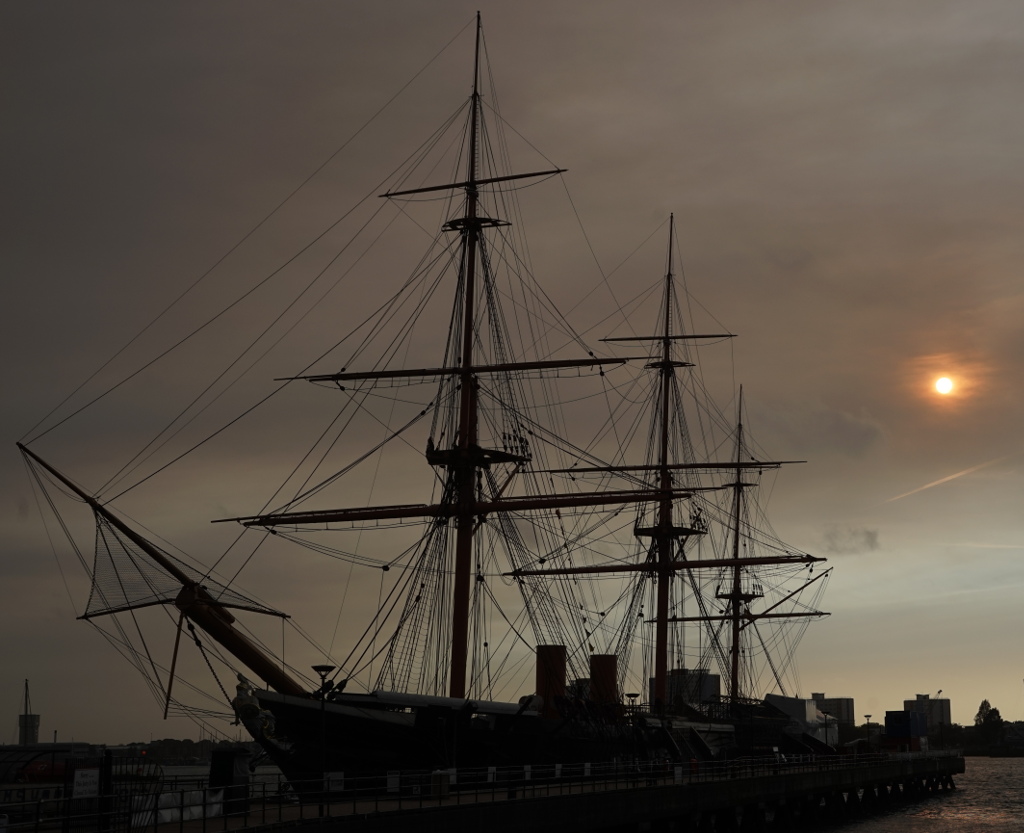 Stayed here for an extra day so got the train to Portsmouth with a view to wandering to Southsea.  We got very lost.  To get to Southsea by foot, leave the station, head away from Portsmouth, get on to Greetham Street, then to Blackfriars Road, follow the cyclepath over the main road, then get onto St Andrews road until you get to Elm Grove.  At this point you can go left to the well known Albert Road, or straight over to Southsea town center itself.  If you find yourself wandering around the university, you are lost.  There are also a couple of interesting shops on Castle Road.

Southsea is a bit odd, having obviously been well-to-do in the past, found itself a bit run down, and now appearing to be on the up again.  We’ll return to Southsea now that we know what to expect, and how to get there.

We probably wouldn’t have come here were it not for the fact that we couldn’t stay for another night in Brighton and there was no room in Chichester today.  Reasonably easy drive, if a bit slow:

Got the 700 bus to Chichester on Sunday, which was rather expensive at over a fiver return for only a few miles.  There was a decent car boot there, and it was a generally pleasant place to wander.

A journey of only 30 odd miles but seemed longer, not helped by the rubbish signposting from east Brighton to the A27.  Ended up on a construction site belonging to University of Sussex.  Thought I’d seen the last of university construction sites.

The campsite at Littlehampton is not well signposted from the north either.  If you go over the railway you’ve gone too far.  No problem, though, turn around at the roundabout at the supermarket and there is a nice big sign coming from the south.

Littlehamton town center is supposed to be a 25 minute walk from the campsite but seemed further, possibly due to the uninspiring route.  The town is pleasant enough, but hardly a place to visit on its own right.  Coastliner bus passes through here so this is a good place for a base for those of us relying on public transport to get around.

Following those few dull and dreary days in Wimereux, long delays at the tunnel due to a broken down train and a dreadful trip on the A259, the France part of the trip is over and we find ourselves in Brighton. As we hate the appalling M20, and the nearly as bad M25, we decided to try to avoid both and spend some time in the south-east. Bad move – the A259 is horrible. Narrow, rubbish road surface, and too many bends. Add to that busy towns and dreadful on street parking and we have a stressful journey:

We are spending a couple of days here, then heading towards Chichester before heading back north.

A fiver each for a full day bus pass duly purchased on board, so off we went for a day out in Brighton.  Got off at the Royal Pavilion and went for a wander.  However, in spite of the rather obvious landmark of the sea, this is an easy pace to get lost in:

When we last visited here about 30 years ago, the obvious place to visit was The Lanes.  All these years on it seems more of a tourist attraction and less of a place to bag a bargain.  No doubt bargains are to be had for those who know what they are doing, but for those of us who don’t, fortunes are there to be lost. 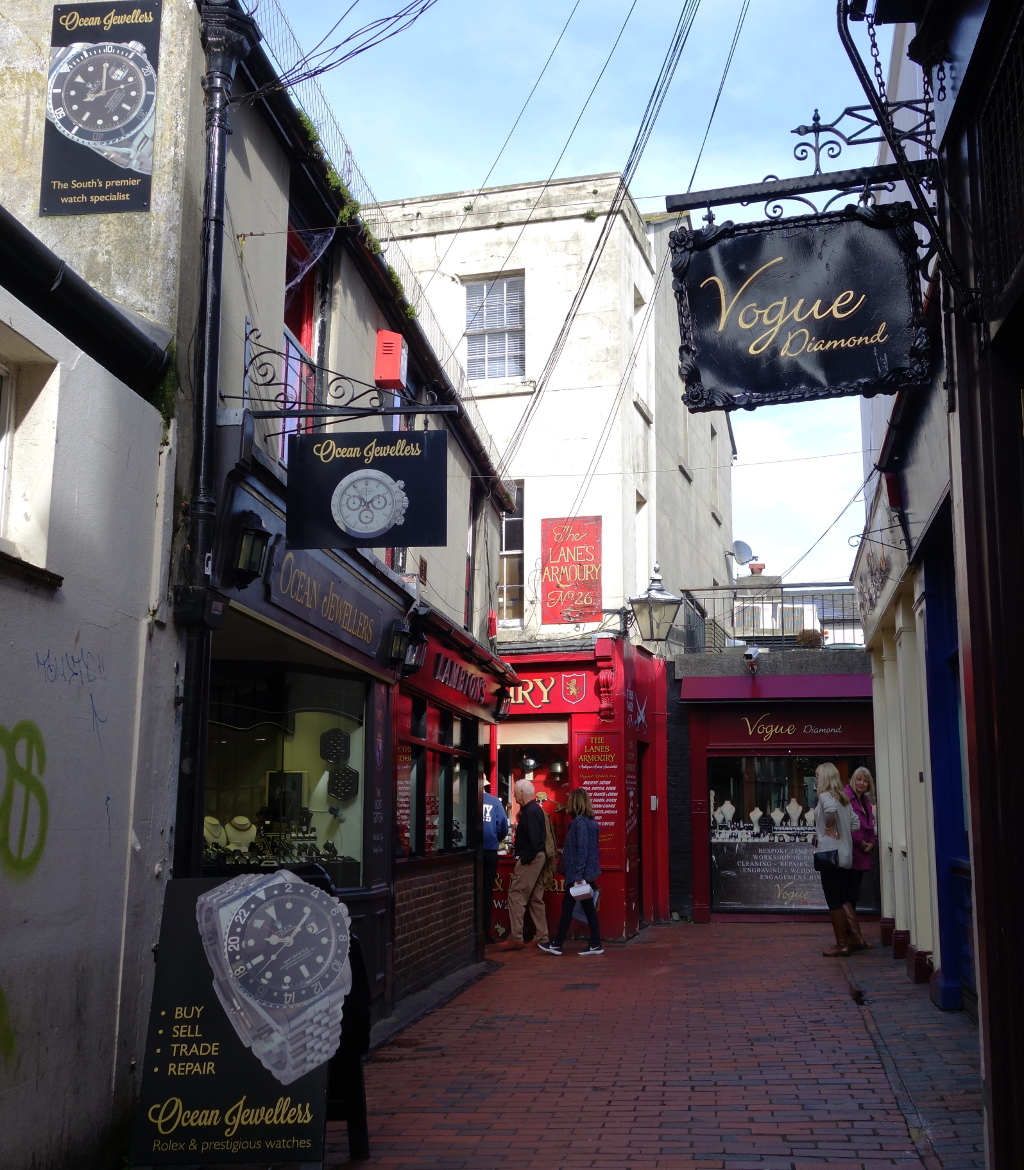 The  northern part of town has a nicer ambiance and more interesting and affordable shops: 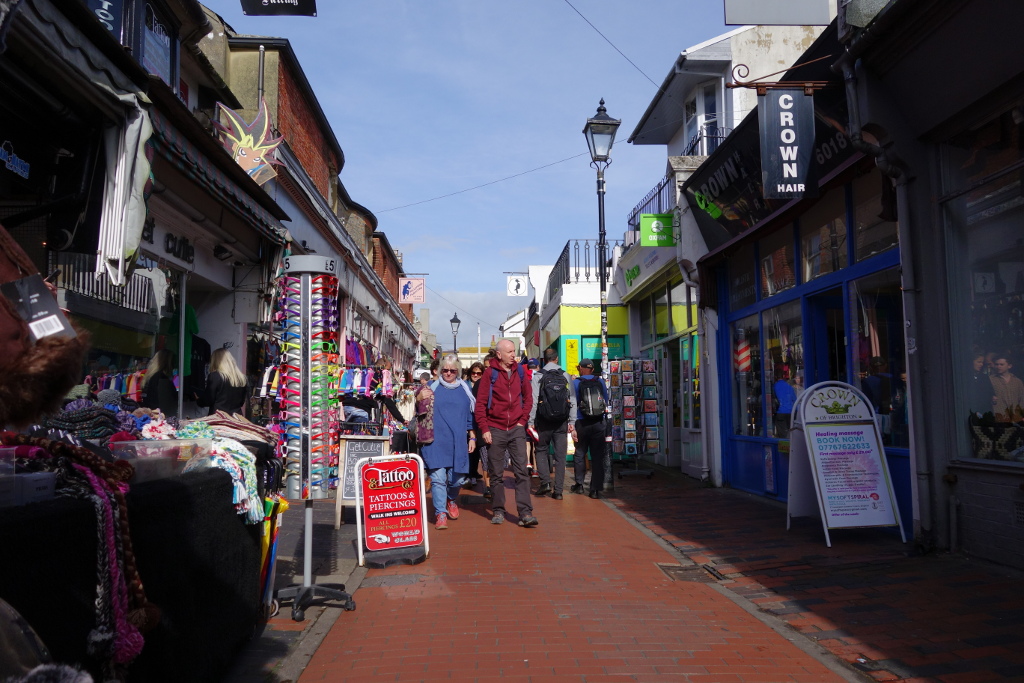 No normal tourist leaves without a picture of: 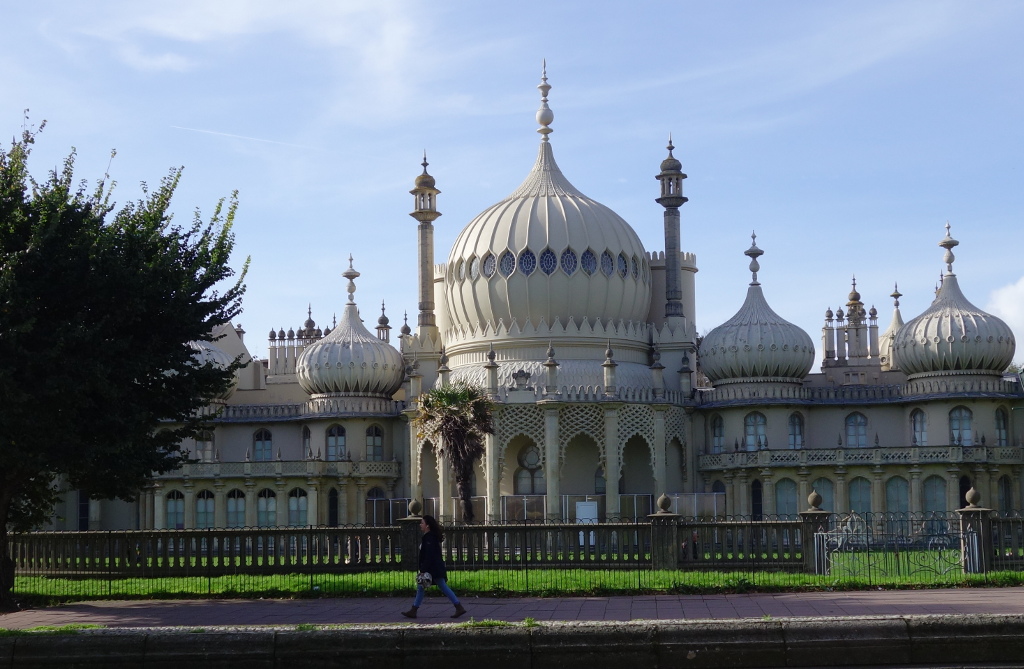 And here is a seagull, who once again puts the Cornish variety to shame: 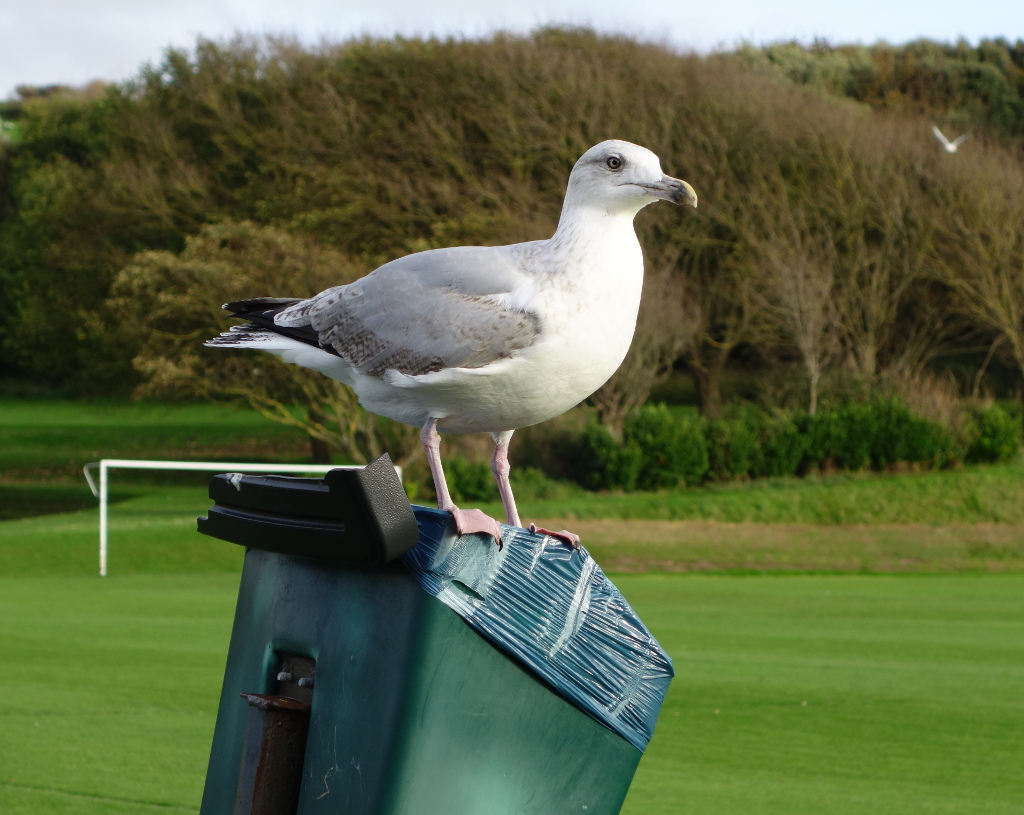 Bird on a bin

The French part of this trip is at an end:

So we pretty much drove on the motorway to Avignon and back, visiting a few places on the way.  We must try harder next time, but there are worse ways to spend six weeks going into Autumn: